Humans have been eating crustaceans since prehistoric times. Archeologists can confirm this from the numerous examples of shell deposits that have been discovered inside the ruins of past civilizations. Once upon a time in Europe, the lobster was a delicacy enjoyed only by the wealthy (while it is much more common now, lobster is still considered a high-class meal). In the early Americas, crustaceans such as lobster and crab were plentiful, and became a staple of New England cuisine, much to the chagrin of the settlers. In fact, lobster was so plentiful, it developed a reputation as a “poor man’s” dish in some regions due to the fact that it was so readily available and so affordable.

In the 1840s, the taste for lobster seemed to catch fire, and commercial fisheries in Maine took advantage of the growing market; hence the rise of the moniker, “Maine lobster.” Since then, the lobster has seen its popularity rise and fall, until finally reaching the delicacy status it enjoys today.

So Why a Lobster Roll? 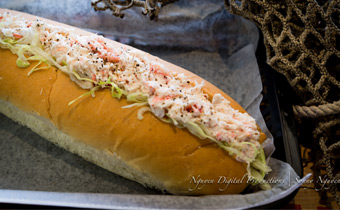 It often seems that, the simpler the recipe, the more complicated the origin; so it is with the lobster roll. Generally speaking, food historians tend to agree on two facts: there is no one way to make a lobster roll, and they are likely a 20th-century invention. Most lobster roll recipes call for hot dog or hamburger buns, neither of which were in existence before 1912. It is also likely that lobster rolls were created to serve as an inexpensive and easy to eat dish for seaside eateries and food stands.

Historians might support the idea that there is no “one” lobster roll recipe. No disrespect to these learned scholars, but at Maine-ly Sandwiches, we know the truth. We know what it takes to make a truly authentic lobster roll, and you can try one for yourself today. Come on down to one of our two Houston locations, or call us to learn more about our catering services. Don’t wait! Join us today.
uxicached